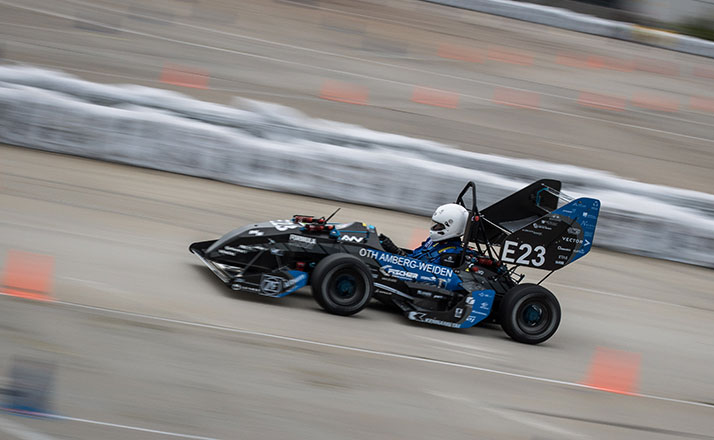 Since the beginning of the past Formula Student racing season, components by Framo Morat have performed reliably on the best known racetracks of Europe.  In the 2017 season, a polygon profile pinion shaft and a matching rack made by the gear and drive experts from Eisenbach, Germany, have been component parts of the rack transmission used to steer the fully electric, lightweight-construction RS17 racing car of the Running Snail Racing Team at OTH Amberg-Weiden (Technical University of Applied Sciences). The shaft transfers the rotary movement from the steering wheel to the wheels. The component required maximum precision for a play-free shaft-hub connection and high core strength and surface hardness. This hardness is achieved using the material 18CrNiMo7-6 and the thermal process of case hardening.

“We were not satisfied with the quality of the pinion shaft used up to the 2015 season,” remembers Maximilian Morodan, a student at OTH Amberg-Weiden and Technical Director of the mechanical division of the racing team founded in 2004 from various departments at the university. “We were fighting against about 3 degrees of play in the steering, which had quite a negative effect on the driving feel of our race car,” Morodan continues. Searching for alternatives for the steering of the RS 16 car, the development team discovered gear specialist Framo Morat. Their inquiry into a collaboration reached the long-established company in the Black Forest at exactly the right moment.

In the course of his own development projects, Walter Kappeler, gear technology specialist at Framo Morat, had been playing with the idea of implementing polygon-profile components in their latest customized drives for some time. “There are a variety of advantages to using a polygon connection as the shaft-hub connection. Depending on the application, advantages of a smaller installation space combined with identical torsional moment compared to the feather-key connection or during disassembly compared to a longitudinal and transverse press fit can be used,” says Kappeler.

The pilot project also paid off for the Running Snail Racing Team. “In contrast to the previously used component, the significantly higher quality of the new pinion shaft allowed us to finally achieve almost play-free steering,” says Morodan with satisfaction. They were able to celebrate a major success just last season, having attained an excellent fourth-place rank at the “home race” on the Hockenheim circuit in Germany in mid-August. To cap it off, the Running Snail Racing Team finished their season at the subsequent race in Hungary with a first-place victory.

The collaboration, successfully begun in 2016, is consequently continuing into the 2017 season. In addition to the further development of thepinion shaft, in which the required miniaturization has been consistently implemented and an increase of almost 5% in profile overlap has been achieved, Framo Morat now also supplies the rack. The theoretical torsional backlash was significantly reduced due to the hard finish machining of the rack’s teeth.

Thanks to the flexible set-up of its project production, Framo Morat was able to provide both components within eight weeks. In May, the RS17 race car was officially unveiled. It is currently undergoing extensive tests and training units. The 2017 season of the Running Snail Racing Team will finally begin in August, when the team will get down to business at events in the Czech Republic, Germany and Hungary.