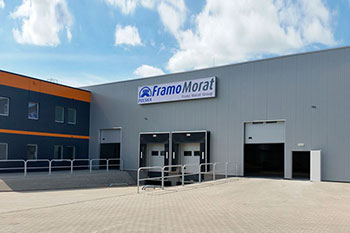 The companies of the Franz Morat Group have been growing continuously in the last years. Framo Morat’s turnover soared from 29 million € in 2004 to the record of 52.4 million €. In the same period, F. Morat nearly doubled its turnover to achieve a record level of 15.8 million €. Our group of companies counts in the meantime 550 employees – almost 200 more than ten years ago.
The growing shortage of qualified specialists and engineers in Germany, as well as the increasing personnel, raw material and energy expenses, are constraining our current above-average growth and therefore require the expansion of our business model.

The new site in Nowa Ruda will strongly contribute to the capacity expansion of the group of companies and therefore strengthen our competitiveness. In the context of the increasing internationalization, we will from now on distribute our growth across several shoulders, thereby supporting the long-term position of our sites in the Black Forest.
In a first phase, we will transfer the highest-revenue series assembly projects of Framo Morat and F. Morat to our new factory with a production area of 2,500 m², so that assembly will start in Poland already in summer 2015. We will furthermore carry forward the development of engineering capacities.
An assembly team will remain in place at the Eisenbach site. It will be in charge of accompanying new series launches, optimization tasks, and it will play the role of the central point of contact. During the whole planning phase, highest priority has been given to securing the jobs at the headquarters. The strong growth of the past years allows us to employ all permanent employees on a long-term basis.

On 01 July 2015 we started production at our new site in Nowa Ruda. This video allows a peek behind the gates.