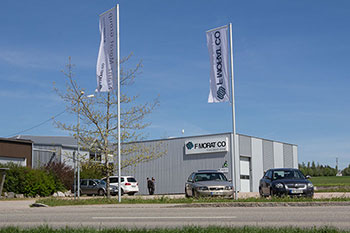 In November 2013 injection-molding firm F. Morat & Co. GmbH of Eisenbach decided to expand production at its Pfaffenweiler site in the German state of Baden-Wuerttemberg. On March 17, 2014, initial production began according to schedule with six machines. The new production site was then officially dedicated on May 5, 2014 in the presence of the workers by the shareholders, advisory boards, and executive management of F. Morat as well as Mayor Dr. Rupert Kubon of Villingen-Schwenningen and Pfaffenweiler municipal administrator Ortwin Nufer.

The new production site is an reflection of the company’s strong growth of the past several years. Sales have increased by approximately 40% in the most recent three years and reached a new record of €13.5 million in 2013. Due to the backlog of orders, the company’s existing plant and machinery were operating at or near their capacity by the middle of last year.

Due to the urgency of the situation, the management of F. Morat elected to lease a production and storage facility in nearby Pfaffenweiler, giving them the ability to take on additional projects and cover the demands of existing customers. F. Morat will initially employ six people in Pfaffenweiler, working in three shifts, including three new machine operators and one set-up worker. The movement of two more machines from the main site in Eisenbach (completed in April) and the anticipated delivery of one new machine in mid-May will create additional jobs. The leased space has a usable space of approximately 800 m², enough room for up to twelve machines. Over the medium term, expansion of the production space to approximately 2,600 m² is possible.